With a combined 28 top prizes in over 14 major international competitions, violinist Bomsori Kim and pianist Pallavi Mahidhara are two musicians to watch. With dazzling stage personalities and exceptional musicianship, this pair will come to Hong Kong for the first time in this Premiere Performances concert featuring gems of the violin, piano and duet repertoire.

This concert is part of Premiere Performances’ Recital Series sponsored by Citi. It is an Associated Project of Le French May and is supported by the Korean Consulate General. 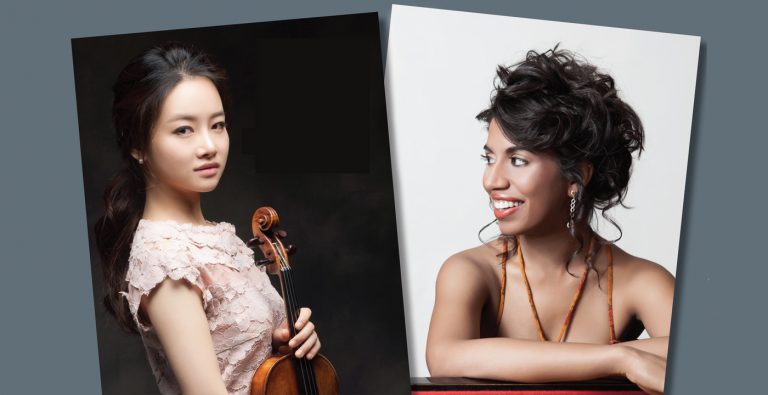 Bomsori means the ‘sound of spring’ in Korean, and violinist Bomsori Kim’s sound is like spring—fresh, clarion, and nuanced.” Classical Sonoma

Impressive authority in front of the keyboard and in the dialogue with the orchestra, rich expressive palette, remarkable rhythmic aplomb…” Concert Classic Journal

…was simply a marvel of rhythmic vivacity and technical bravura.” Serenade

South Korean Bomsori Kim has established herself as part of an emerging generation of internationally recognized violinists. Her debut album featuring the Wieniawski Violin Concerto was released in October 2017 on Warner Classics to great critical acclaim, and has already garnered several award nominations. She first gained attention in 2010 as the youngest prizewinner of the 4th Sendai International Music Competition, which led to an internationally acclaimed concert debut in 2010. More recent accolades include Second Prize and Radio-Canada’s People’s Choice Award in the 2016 Montreal International Musical Competition. This came on the heels of her astonishing success at the 15th International Henryk Wieniawski Violin Competition, which included winning both Second Prize and Critic’s Prize, as well as nine additional special prizes. Forbes Korea has named Ms. Kim one of “2018’s 2030 Power Leaders”.

American Pallavi Mahidhara was the Second Prize winner and Young Audience Award winner of the 2014 Geneva International Piano Competition. She also won Second Prize at the VI International Prokofiev Competition in Saint Petersburg, Russia. She has been a winner of the Steinway Förderpreis in Berlin, the Astral Artists National Auditions in Philadelphia, and has received on multiple occasions, the “Sobresaliente” Award from the hands of Queen Sofía of Spain. In September 2008, on a few hours’ notice, she stepped in for Van Cliburn at the Liberty Medal Award ceremony, honoring former Soviet leader Mikhail Gorbachev.

High-resolution photos of the musicians may be downloaded here