Premiere Performances is proud to announce our exciting Recital lineup for the 2018/19 season.

Save up to 25% with our early bird discount – don’t miss this special offer! This pre-order period is available only on our website until 18 August, when tickets go on sale at Urbtix. Get your tickets now while you have access to the whole hall – before tickets are available to sponsors or the general public. 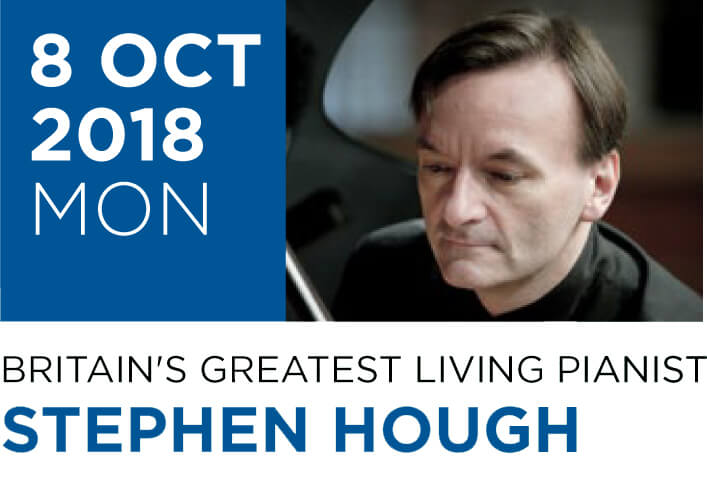 Piano genius Stephen Hough returns to Hong Kong with a specially-devised solo recital that explores every side of his artistic personality: thinker, communicator and supreme virtuoso. This new recital programme focuses on Debussy, commemorating the 100th anniversary of the composer’s death. Cleverly paired with Schumann and Beethoven, this programme explores the radical nature of Debussy’s music. It is a programme full of depth and contrast.

Experience the dazzling skills of gold medal winners István Várdai (cello) and Sunwook Kim(piano) who are teaming up to present a virtuosic recital of gems of the cello/piano repertoire.
István Várdai is the only cellist in the world to have won Gold Medals at both the International Cello Competition in Geneva (2008) and the ARD Competition in Munich (2014), the two most important contests for cellists. Sunwook Kim came to international recognition when he won the prestigious Leeds International Piano Competition in 2006 at age 18, making him the competition’s youngest winner for 40 years.

Baroque meets contemporary in this recital by two BBC New Generation Artists. Violinist Jennifer Pike and harpsichordist Mahan Esfahani will team up to present a programme pairing composers of the baroque era with those of the 20th century – while demonstrating the incredible versatility of the traditional violin and harpsichord pairing. British/Polish violinist Jennifer Pike first gained international recognition when, aged 12, she became the youngest-ever winner of the BBC Young Musician of the Year and the youngest major prizewinner in the Menuhin International Violin Competition. Iranian-born Mahan Esfahani was a BBC Music Magazine’s ‘Newcomer of the Year’, and a shortlisted artist for the Gramophone Artist of the Year — the first harpsichordist to achieve each of these accolades.

Take ten of the most prolific composers of our time, including two Pulitzer Prize winners, combine them with a mezzo-soprano superstar and a cutting-edge string quartet, and you have a recipe for a spectacular evening of music. Groundbreaking string quartet Brooklyn Rider is teaming up with Grammy Award-winning Anne Sofie von Otter to present a “constellation of diverse songs and compositions”, a unique selection of new arrangements for voice and string quartet by composers including Philip Glass, John Adams, Björk, Elvis Costello and more.